FREE SHIPPING ON ALL DOMESTIC ORDERS $70+ Meet the stylish Rustico Men's Leather Belt with matte nickel or antique brass hardware. Strong, attractive and minimal, the belt is made to last the test of time. Sourced from North American hides and made in the USA. The Chicago Screws allow for buckle customization and offer superior durability. As with all of our products, we ensure the highest quality materials and craftsmanship.

Giving as a gift? See it in a bundled Gift Set

This is a real leather, no paper filler belt I have been looking for for a long time. I have no issues with the belt, very strong feeling. I can see this lasting many years. Awesome

Best belt I have had in many years. Great thick leather like we had when I was a kid on the ranch.

N
N.
NOT THE SAME QUALITY

I would like to start off with asking why my first 1 star review was deleted? If you guys are going to change the quality of the belt, then the ppl should be informed. This is the third belt that I have purchased from rustico. The two belts that I initially purchased last year were great quality leather belts. It was worth every penny, which is why I went to purchase the third a couple of weeks ago. BUT this third belt that I recently purchased is complete cheap crap, not even worth $30. You can feel the difference in quality of the leather, it’s also thinner and stiffer. I was told that it needed to be broken in, but that’s not the issue Bc For the belts that I bought last year, one of them has been in the box unworn and still has that same quality that my broken-in belt has. This new belt you guys are marketing is not the same quality belt. I’m going to post pictures below with side by side comparisons. (The lighter belt is the belt that was purchased two weeks ago and the one I am writing a bad review on).

This is very disappointing. I have purchased a lot of different items from this site (pocket wallets, beard kits, belts) and in multiples, but I will not be purchasing or recommending anymore items from this company. For 1) your overcharging for a different/cheaper quality Of leather and 2) the customer service for my complaint over the purchased belt was less than satisfactory and 3) Your deleting 1 star reviews from consumers that has made multiple purchases from y’all in the past and that’s dishonest. 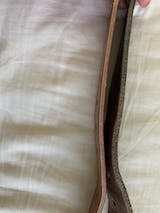 Hi Nick, I had reached out to you before about your belt. We have not changed our quality of leather nor the type of leather we use for the belts. If you'd like I can exchange the one you are disappointed in with a belt of a different color? Or I can exchange your belt for a different product. We appreciate you returning to Rustico multiple times and would like to continue to help you have a great experience. Let me know if this is something that interests you! Warm Regards, ​ ​Jack
k
k.S.
nice wallet and belt

I received my belt and wallet last week, and was pleased with the thickness and quality of the saddle leather, my items were made with. I work construction,and I'm constantly sticking razor knifes, or pliers in my back pocket with my wallet. This extracts a heavy toll on my wallets, but this wallet is of the leather that most ( of the better) tool belts are made from. It should last awhile. That reminds me,do y'all make tool belts?

What is handmade quality?

It's the artisans touch

It's the finest materials